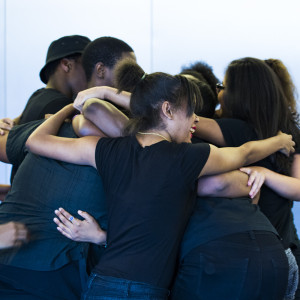 Engaging, joyful, passionate, talented, energetic and kind are just some of the words co-founder Molly Creamer uses when describing the actors and organization she worked with during Opening Act’s Summer Arts and Leadership Conservatory.  The Opening Act Theater Arts and Leadership Conservatory is an intensive, two-week summer program in New York City that includes courses in Shakespeare, Voice, Scene Study, and Leadership that culminates in a final showcase performance.  Find The Courage was honored to be the leadership component for this prestigious conservatory.

During the first week, FTC ran its 5-day FTC program with students for one hour a day, after the students had already completed a full day of training in Shakespeare, voice, and scene study.  During the second week, the student actors created different find the courage situations based on their own experiences/observations and acted how they would defuse those situations using the FTC strategies they had learned. The students performed these improv FTC scenes alongside their tremendous Shakespeare and Monologue scenes in the showcase. The showcase was truly moving; it highlighted the vast talents and deep passion of the students,  as well as the first class coaching they received from their Opening Act teaching artists, program directors, executive director and Opening Act family.

Find The Courage felt incredibly lucky to be a part of Opening Act’s Summer Arts and Leadership Conservatory and would like to sincerely thank Suzy Myers Jackson, Cathleen Carr, Marcus Denard, Meghan O’Connor and Julia Sirna-Frest for welcoming Find The Courage into their fantastic program.  FTC would also like to give a heartfelt thanks and shout out to the 2015 Summer Arts and Leadership Conservatory actors – it was an honor and joy to work with you!  Lastly we would like to thank our  Find The Courage supporters who attended the showcase, as well as our FTC supporters who allow us to bring programs like this into the community.

Learn more about Opening Act and all the great work they do in NYC here.

Stay updated with Find The Courage here and click here to help support our efforts!